How do I start? It is with horrible sadness that I have to say that I had to euthanize my 14.5 yo precious kitty cat. He had a cancerous mass removed last year. I was told that it was a rare form of cancer that might reoccur, but wouldn't metastasize. However, this time they were wrong. He was still playing hard a month ago, but around that time, he stopped coming to us when we would call him to eat. He has had diabetes for a few years now so we separate our kitties to eat. Finally a few days ago he stopped eating at all even when we did go pick him up. It took us 20 minutes to find him Thursday night and I was afraid that when I did find him, he would be dead. I finally found him in our shower. He was alive, but you could visibly tell that he was very, very sick. I called the vet to try to get him in this morning (Sat), but they only had an appt at 4pm yesterday. John went with me as he knew this was going to be so hard for me. They did blood work and his white cell count was sky high, bu this temp was low. That all pointed to the fact that the cancer had spread to his bones. I had the option of giving him fluids and pain meds and bringing him home for the weekend, but I just felt that I would be doing it for myself and not for him. So I had to make the agonizing decision to put him to sleep. I didn't know if I was strong enough, but I was with him until the very end. I do take comfort in the fact that the last thing he saw/felt was me stroking and kissing his head and telling him how much I loved him and what a good boy he was. He purred until his last breath. I know that not all of you have the same feelings about your pets, but he was a family member. I loved him more than anything. He saw me through some of the worst days of my life. Even just a few weeks ago, he got on the bed for one last time to comfort me while I was crying/grieving over the loss of this last baby. I remembered yesterday that it was the last time he got on any furniture. And he did it for me. I will always love you, Little Bit. 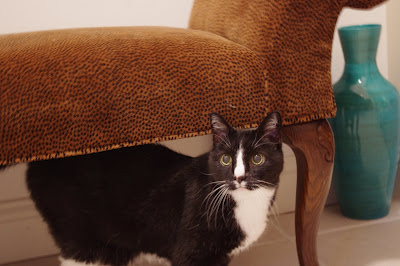 Here he was a few weeks ago. The last really good pic I have of him.
Posted by lovejoy_31 at 5:52 AM